Nino, The Lovely Bulldog – How To Model A Dog With Sugar Paste

Nino, The Lovely Bulldog – How To Model A Dog With Sugar Paste

Valentine’s Day has supporters as well as detractors. In my opinion, we have to show our affection to our loved ones every day, not just for Valentine’s Day.So, instead of doing a corny cake full of hearts and roses and a big LOVE sign, I’ve decided to turn the situation around.

As I’ve probably told you before, I adopted two Spanish greyhounds a year ago and with them, I discovered a new dimension of the word love. A year later, they’ve become two more members of my family, which doesn’t make any sense without them. So I took inspiration from them in order to make this tutorial. 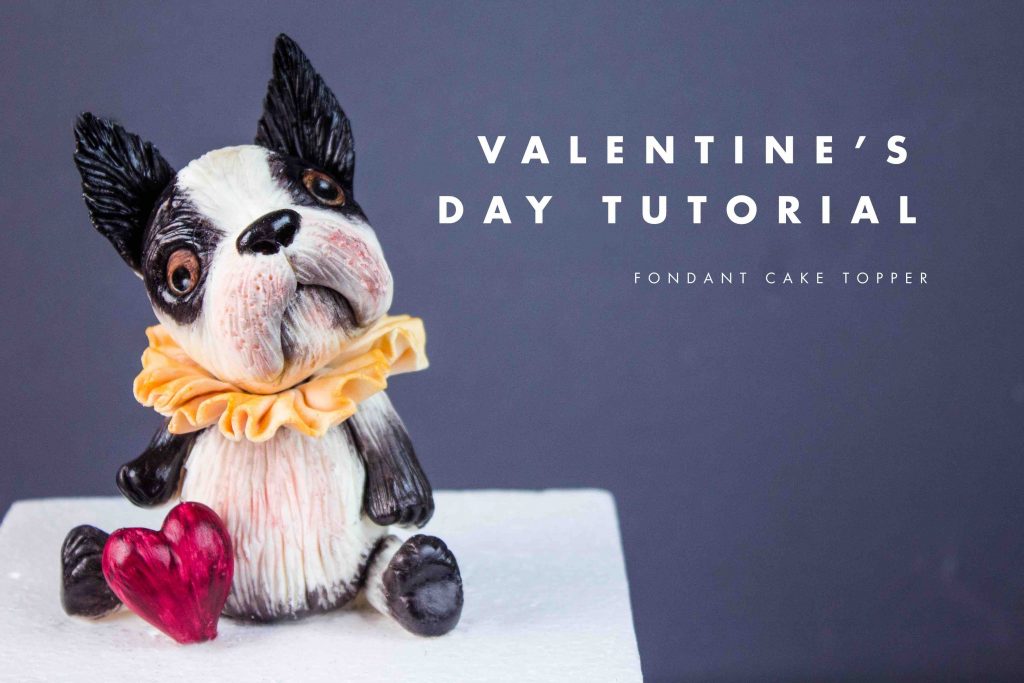 Today I’m going to show you how to make a sugar paste bulldog (which is one of my favourite breeds). I used Renshaw Modelling Paste. This paste is spectacular, as it’s solid enough to create big figures without having to wait for it to get dry. It also allows you to add and rectify as often as necessary. 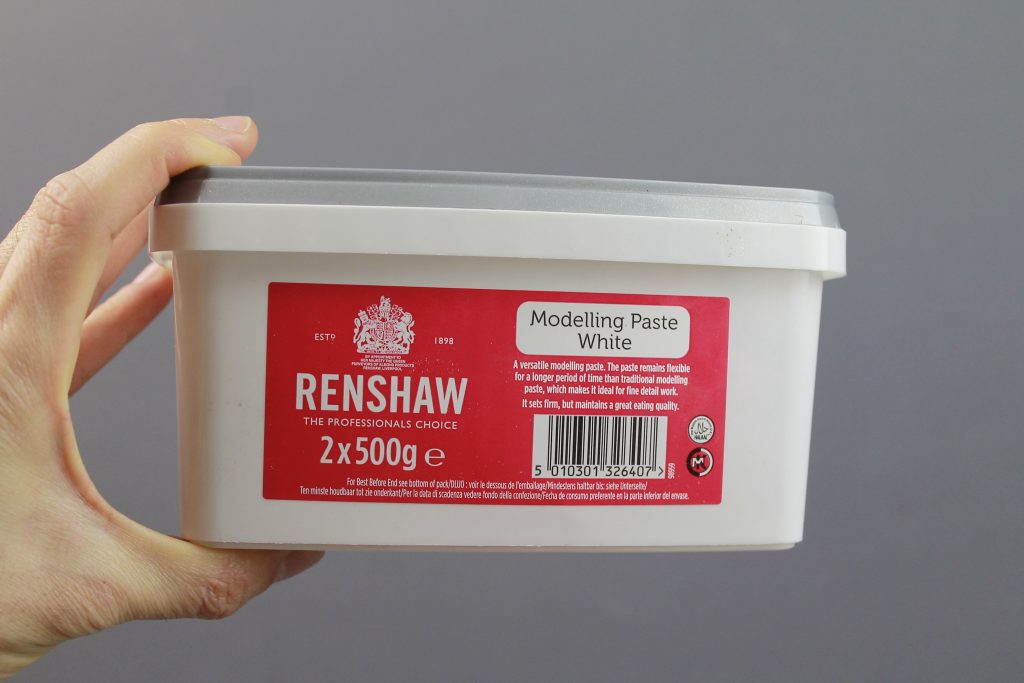 1. You should start with the bulldog’s head. Knead 160gr of the Renshaw paste and add some Crisco if it needs more elasticity. Make a perfect ball, making sure it has no wrinkles or cracks. 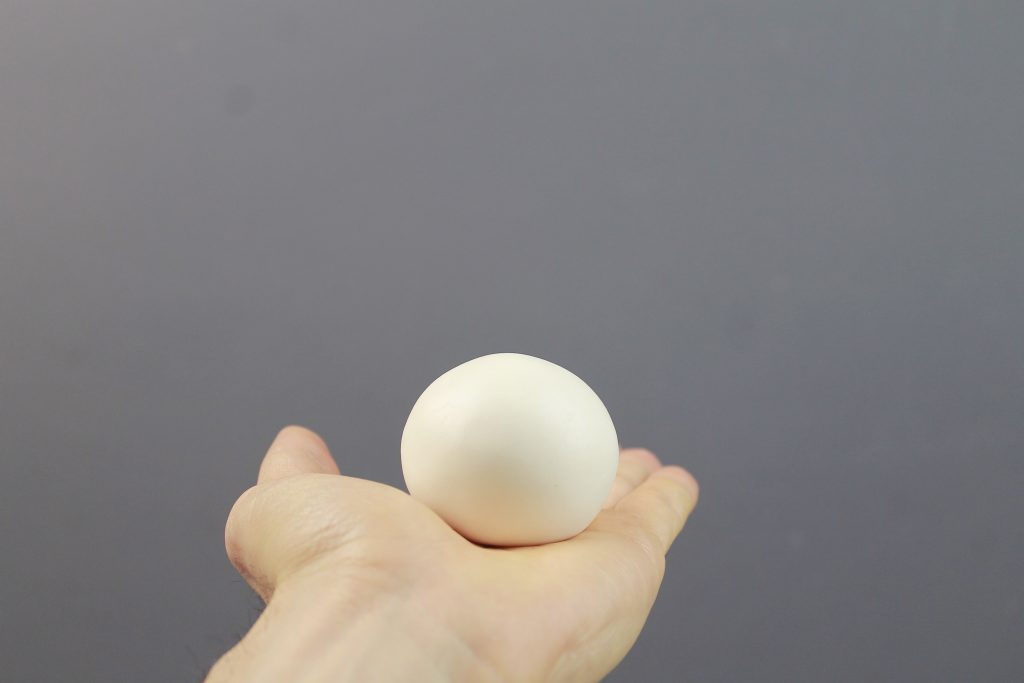 2. For making the snout, press with your finger in order to separate 1/3 of the ball. The ball will deform, as you can see in the picture below. Next, push upwards the separated part of the paste to sharpen it; that way you will start shaping the mouth and the nose. Let the ball rest on a sock full of cornstarch or rice. 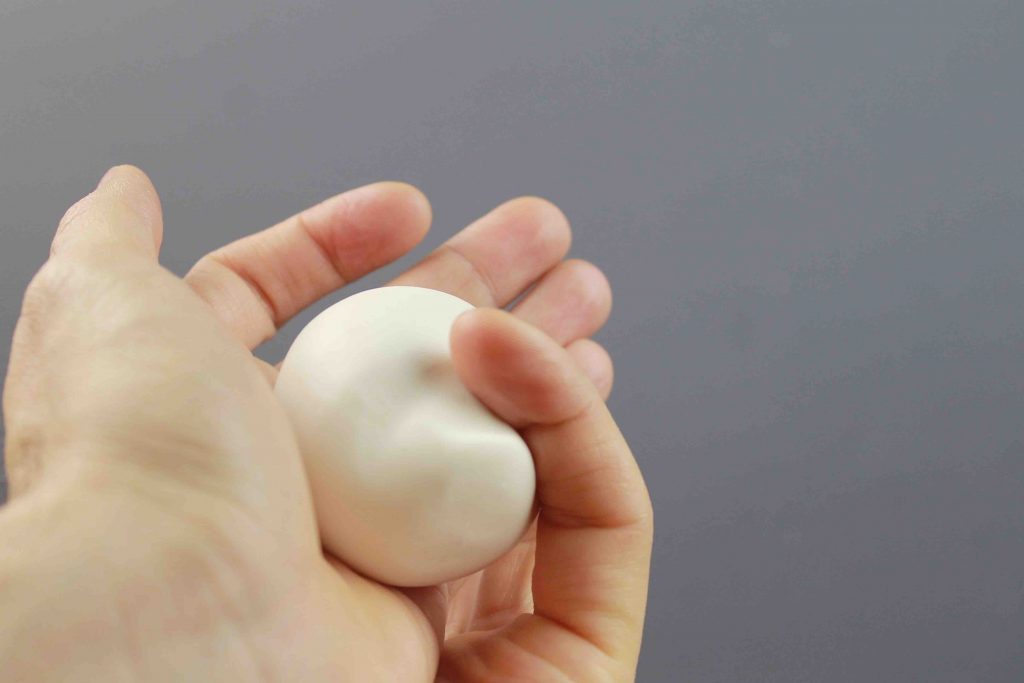 3. Take a piece of the Renshaw Modelling Paste and shape it like a “churro” or a rope, well rounded. Then, smash one of the sides. It has to look like a mandarin segment. You’ll need this piece for the cheeks, so verify if it has the correct proportion before gluing it. 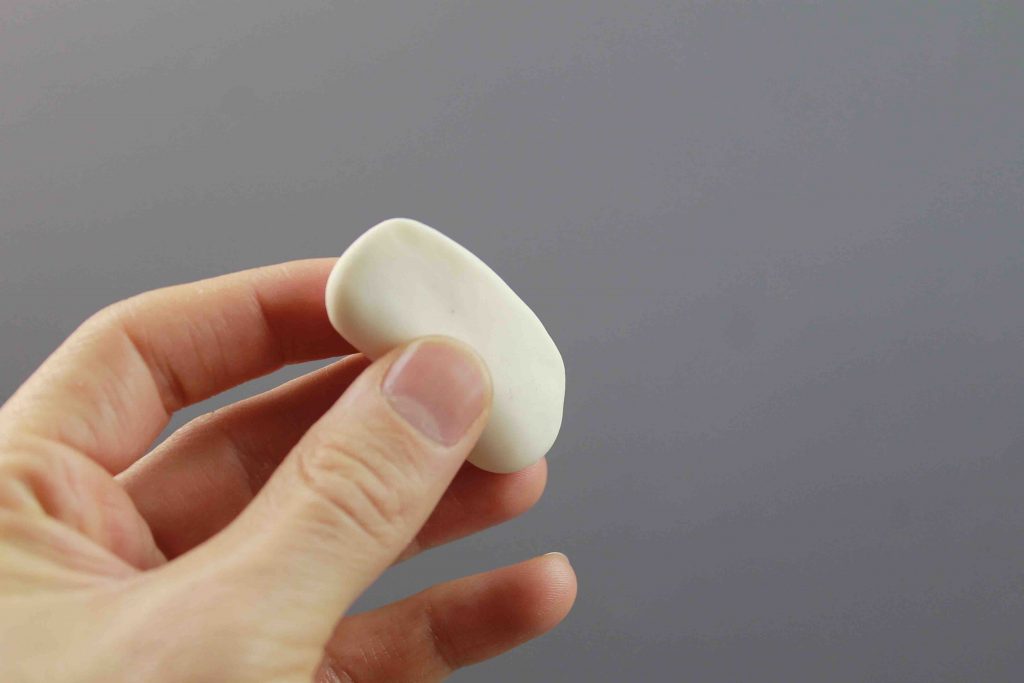 4. Put some edible glue on the ball and stick the cheeks to it. With the help of a dresden tool, press the paste in order to assemble both pieces and fuse the joint. 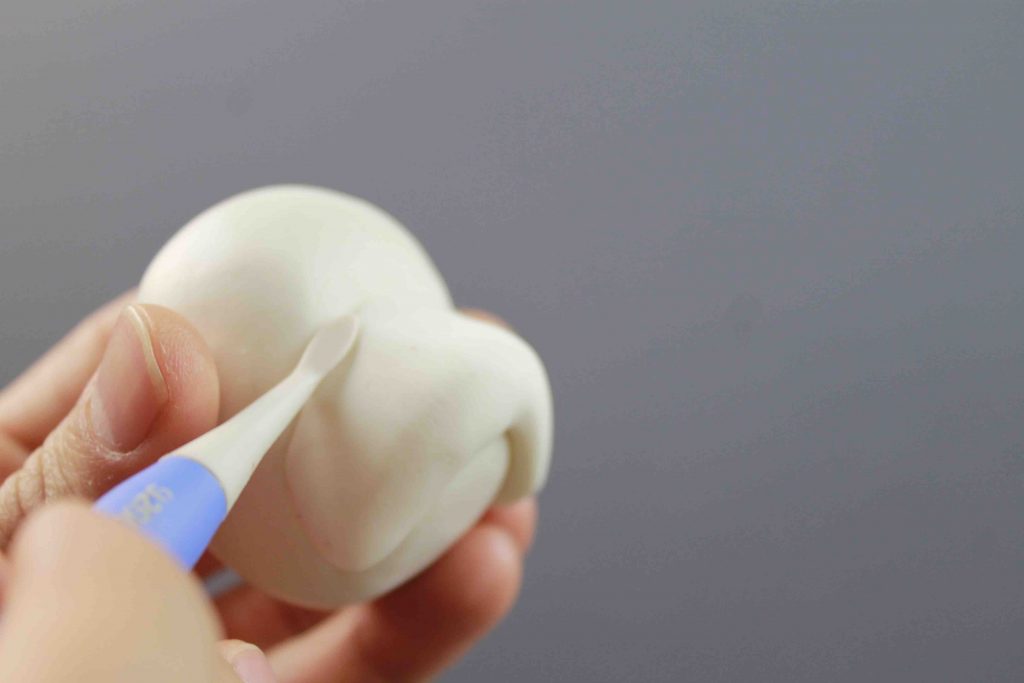 5. With the help of a plastic knife, make a small incision right in the middle in order to divide the cheeks in two halves. 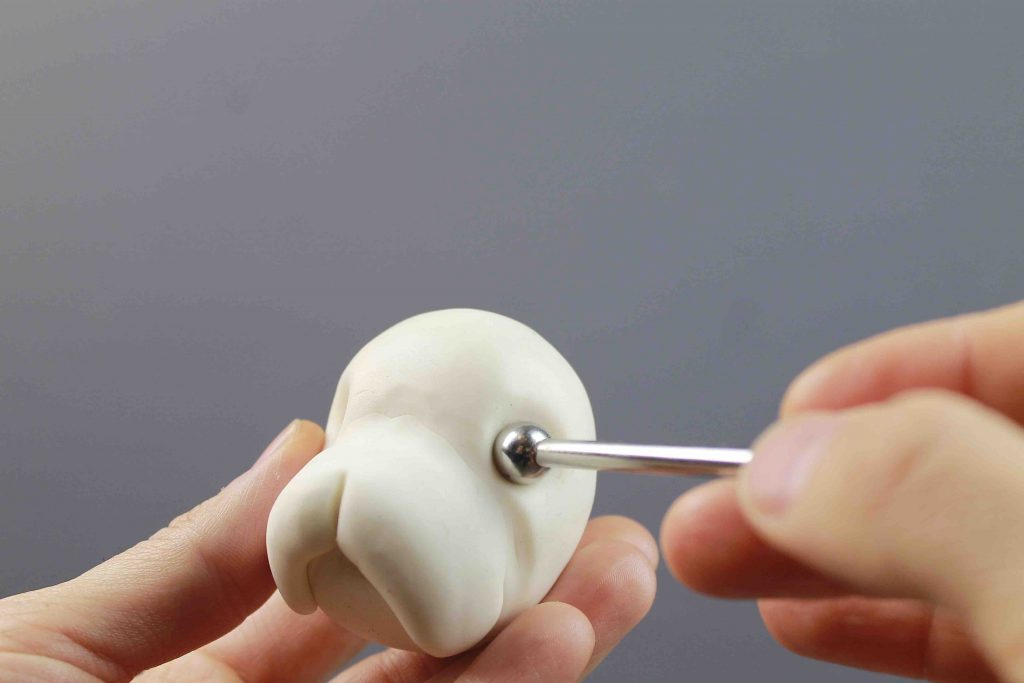 7. In the picture below, you’ll see how the eye sockets must look. For the nose, make a small rectangle with some Renshaw paste and put it in the centre of the cheeks. Use a dresden tool to assemble both pieces. Once they’re integrated, make two holes to finish shaping the nose. 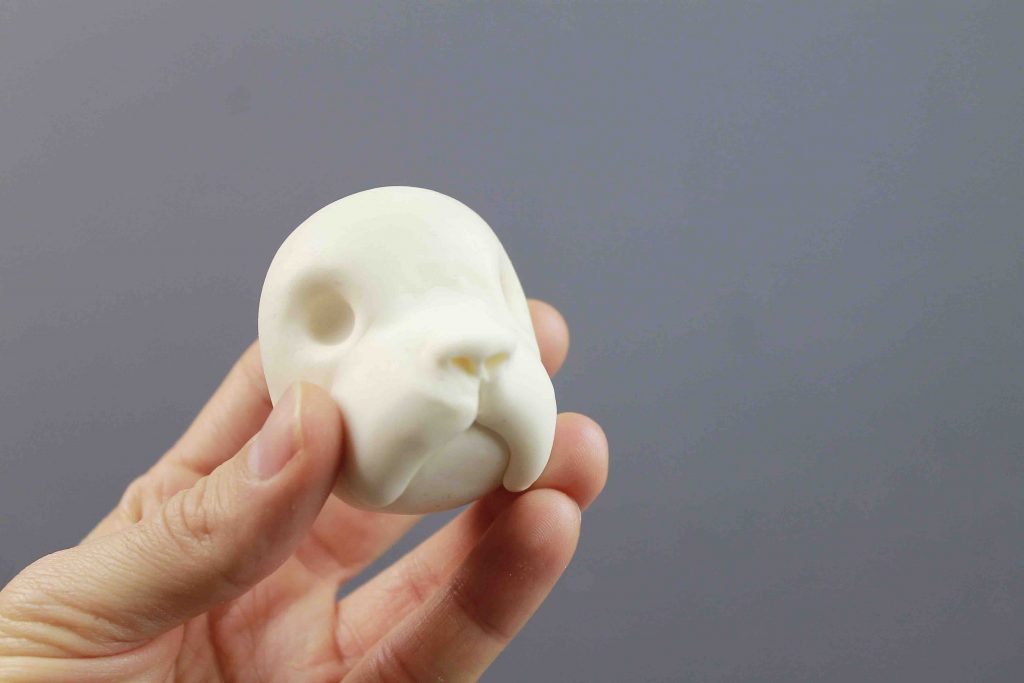 8. Make two small balls, both of the same size. Put them inside the eye sockets and press in order to flatten them. 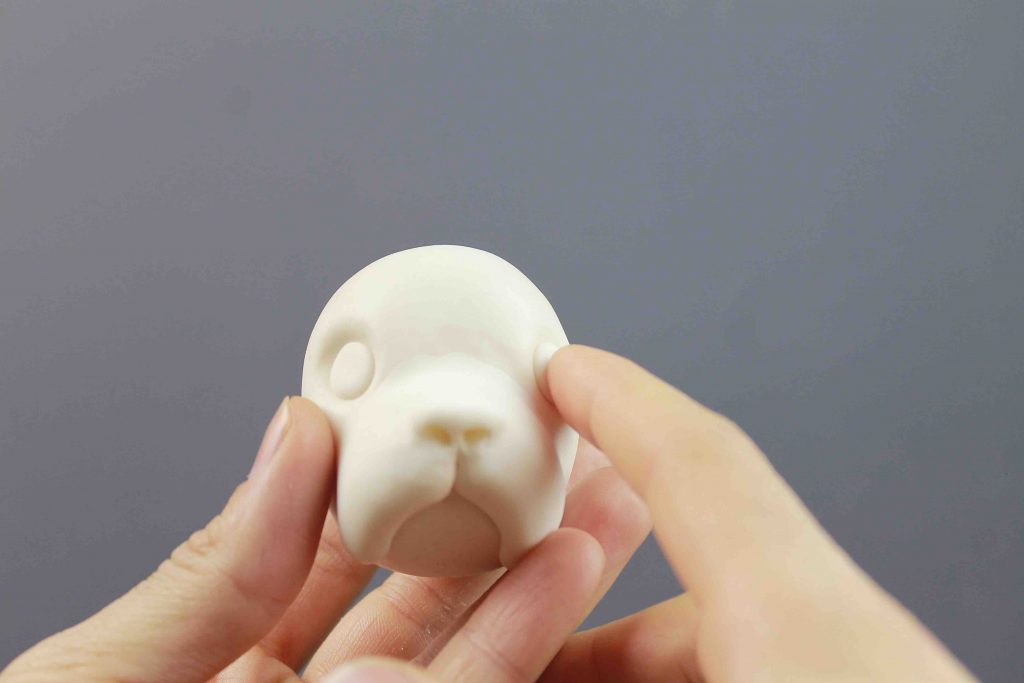 9. With the help of a small ball tool (or with the end of a brush handle), press slightly in order to make the pupil of the eye. This way, the inner part will be easier to paint. 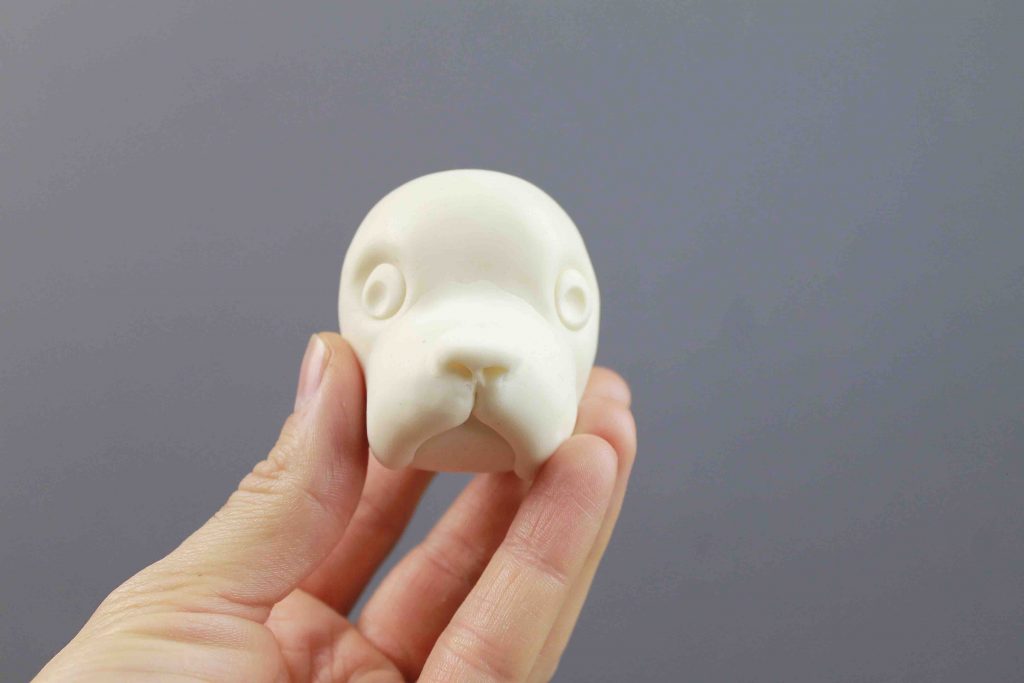 10. After finishing with the face, add some hair texture with the help of a dresden tool. Make some thin lines with the tip of the tool, from the nose to the edges. 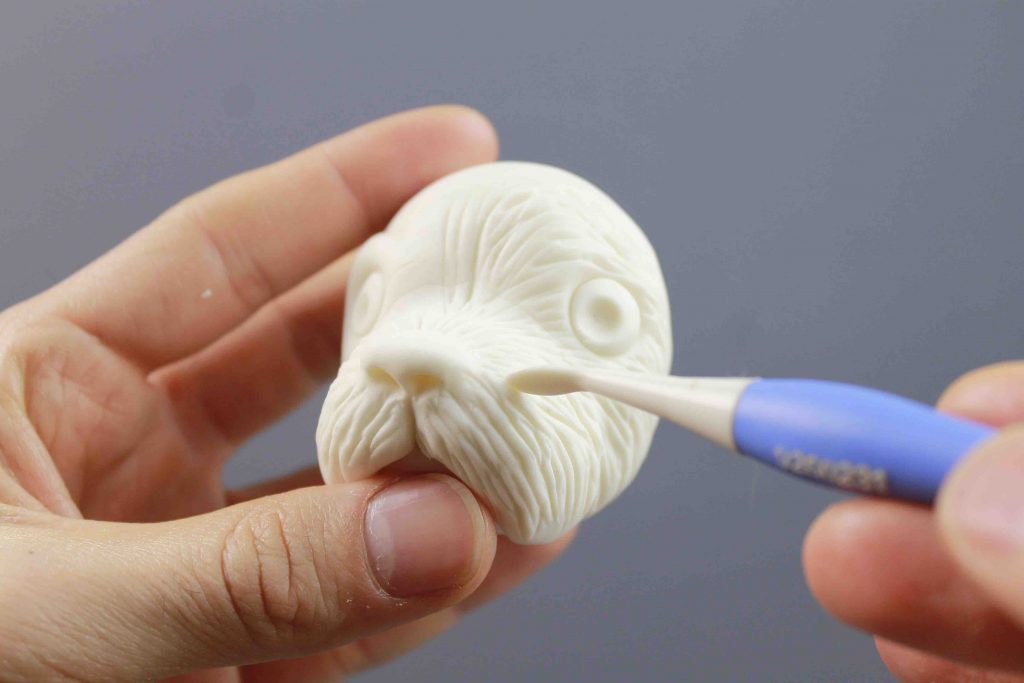 11. For the body, use 150gr of the Renshaw Modelling Paste and make an egg. Stick it in a piece of porexpan with a skewer. Cut the skewer with a floral plier up to 3cm from the body. 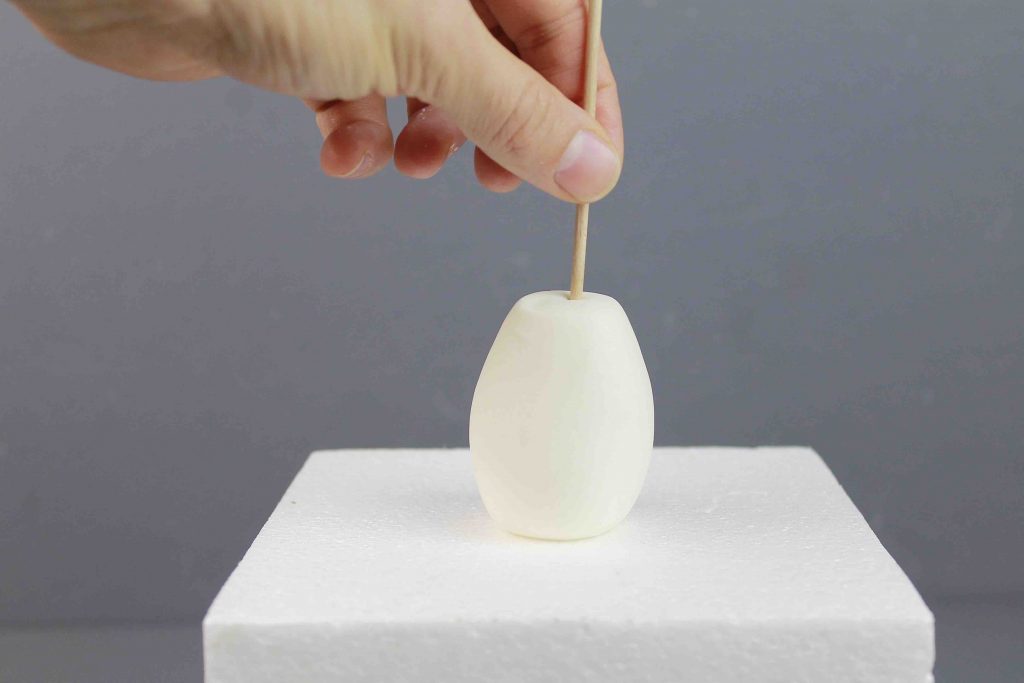 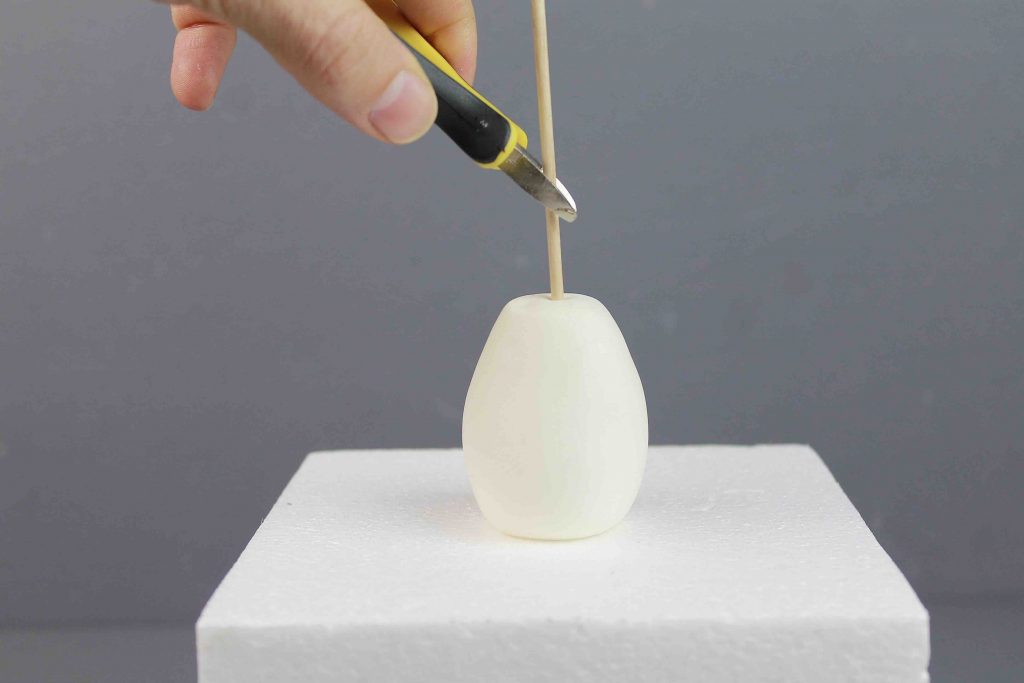 12. Add some edible glue and prick the head to the body. For the arms, make two balls of the same size and smash them with your fingers. Sharpen one of the edges and make some marks with a knife on the other edge in order to make the hands. 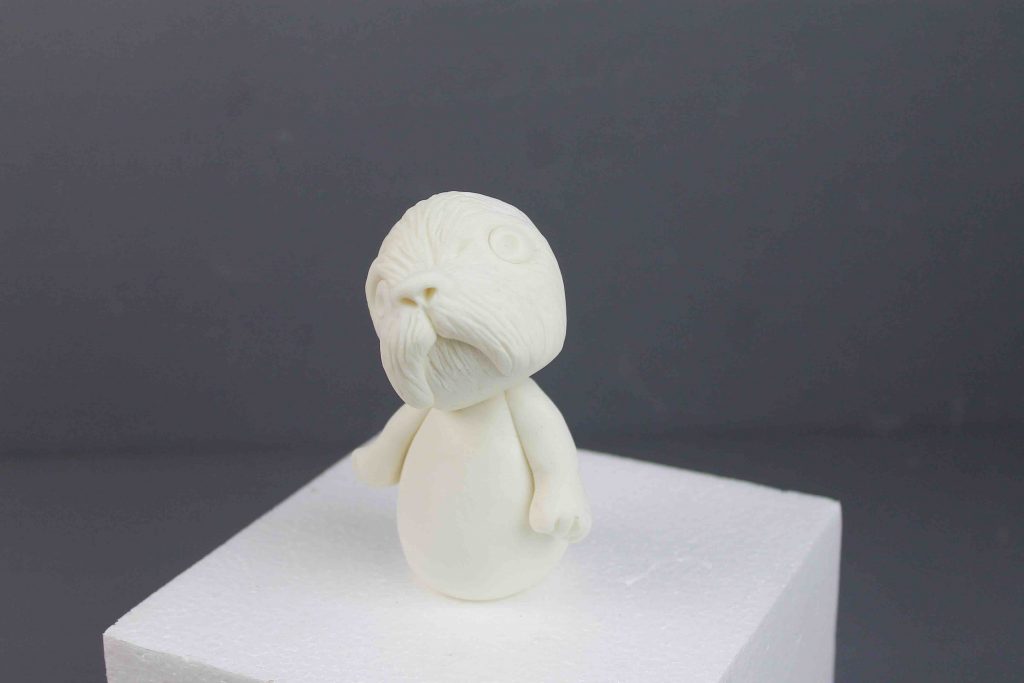 13. For the legs, make two balls of the same size. Flatten them slightly in order to shape them like a “churro”. Pinch one of the sides to make the feet. Then, make some marks with a knife in order to make the fingers. 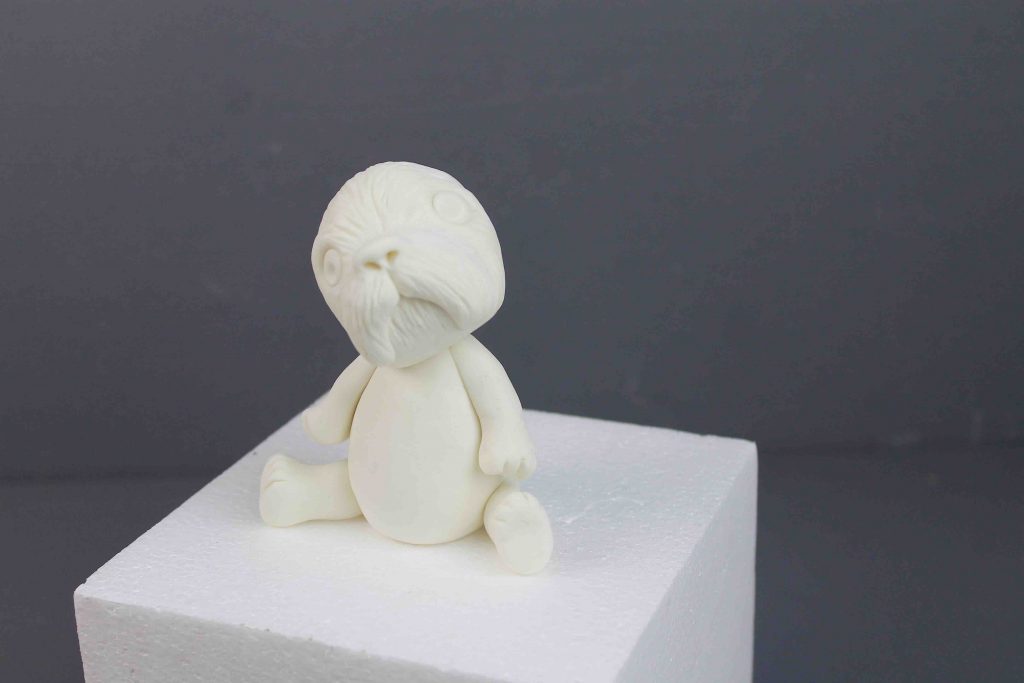 14. Texturize the whole body like we did on the head. Add the ears, previously texturized, sticking them with a bit of edible glue. 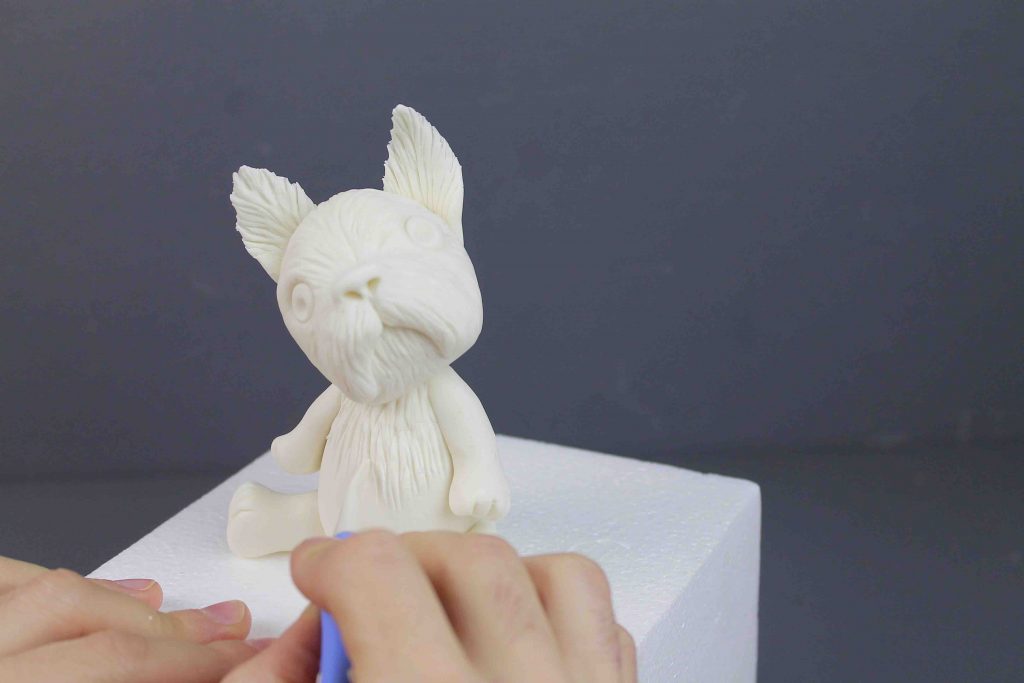 15. Add some colour. You can choose the ones you like most. I myself opted to do the typical bulldog and used only black and white. Paint the ears, the eye contours and the edges of the legs using a mixture of alcohol and black colorant (gel or powder). You can also slightly shade the leg joints and the lower part of the mouth. 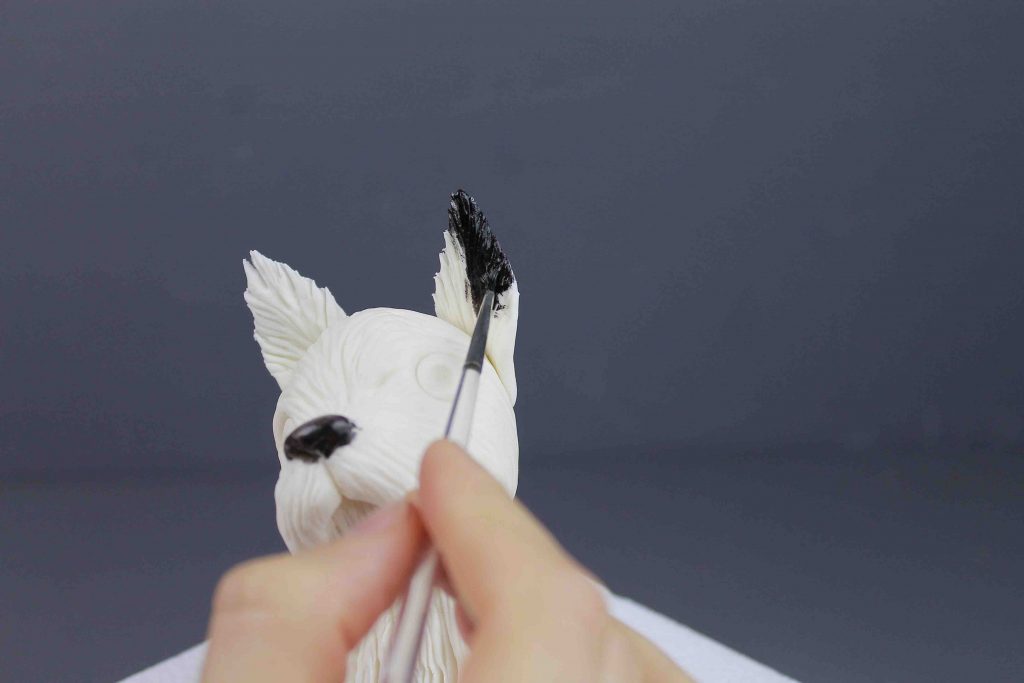 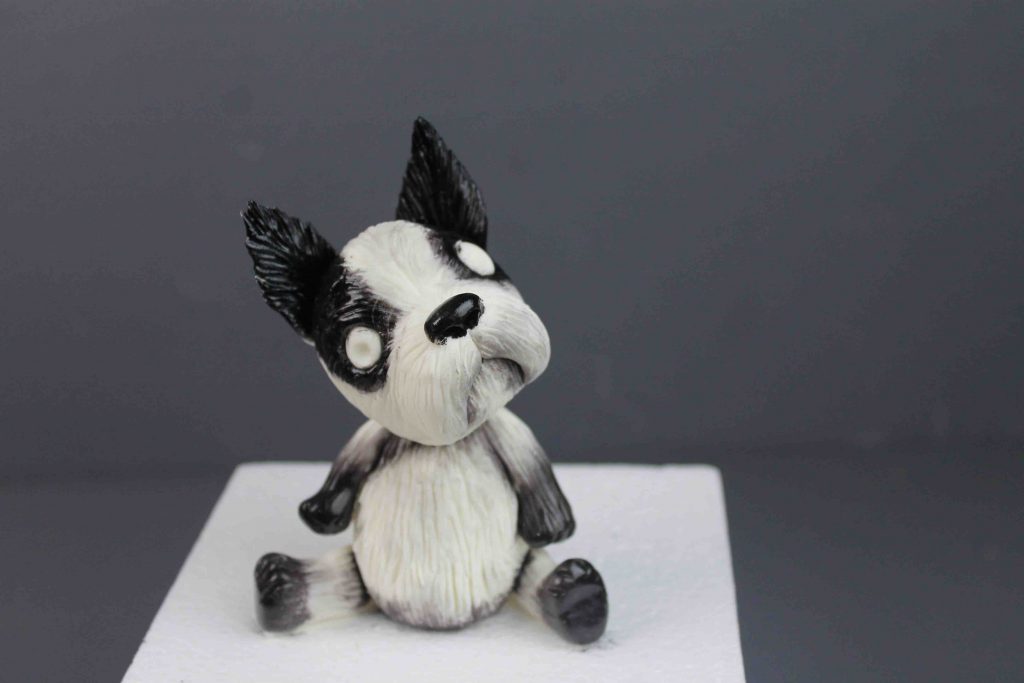 16. In order to paint the eyes, use a thin brush. Mix some brown colorant with some alcohol and paint the eye, except for the pupil. 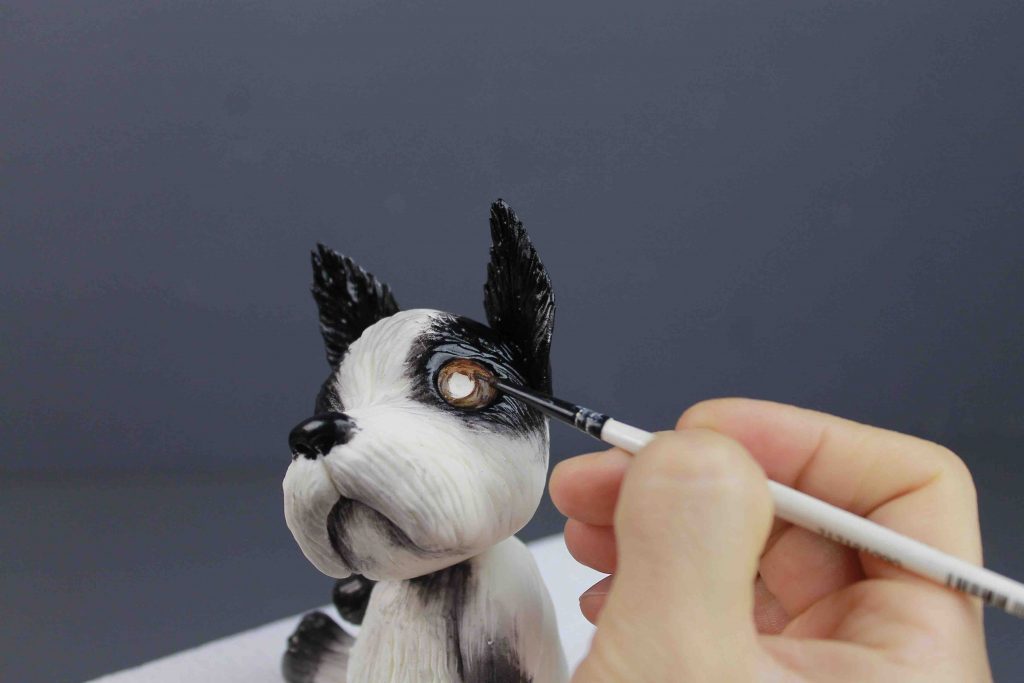 17. In order to paint the pupil, use the same mixture you used for the body. 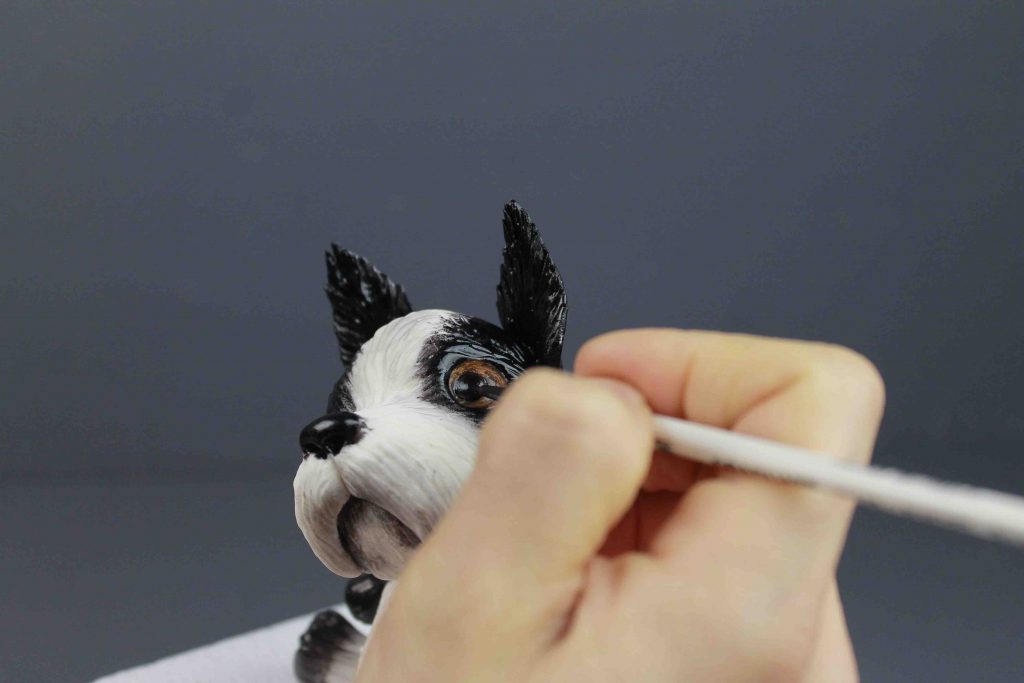 18. I made a little heart to add some detail to the topper. Make a ball of paste and then shape it like a teardrop. With a dresden tool, make a cut on the upper part and model both sides of the heart. Mix some ruby colorant with alcohol and paint the heart. Prick it in a toothpick. 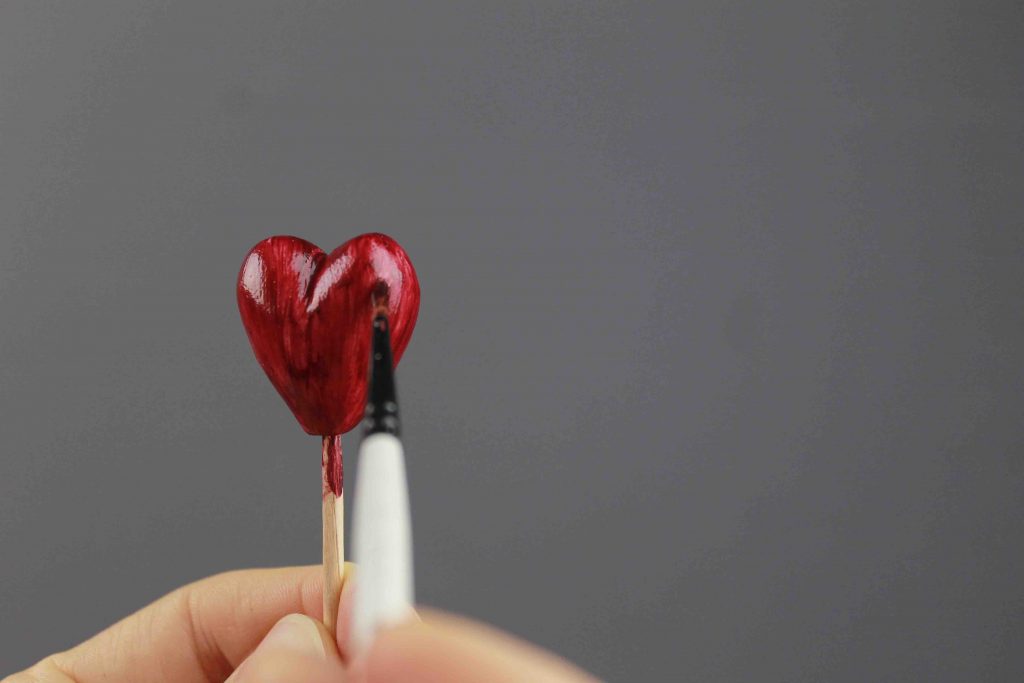 19. Use some pink powder colorant and add some shades to the cheeks and the belly. 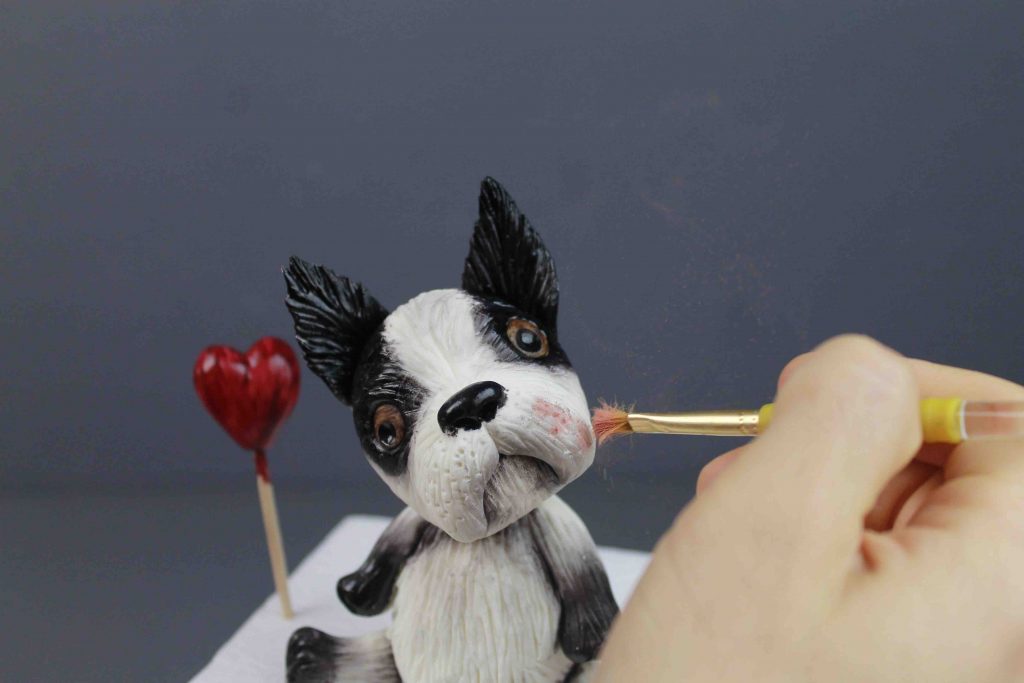 20.  Dye some Renshaw Modelling Paste with peach colorant. Stretch some thin stripes and fold them in order to make some pleats. Glue them around the neck. 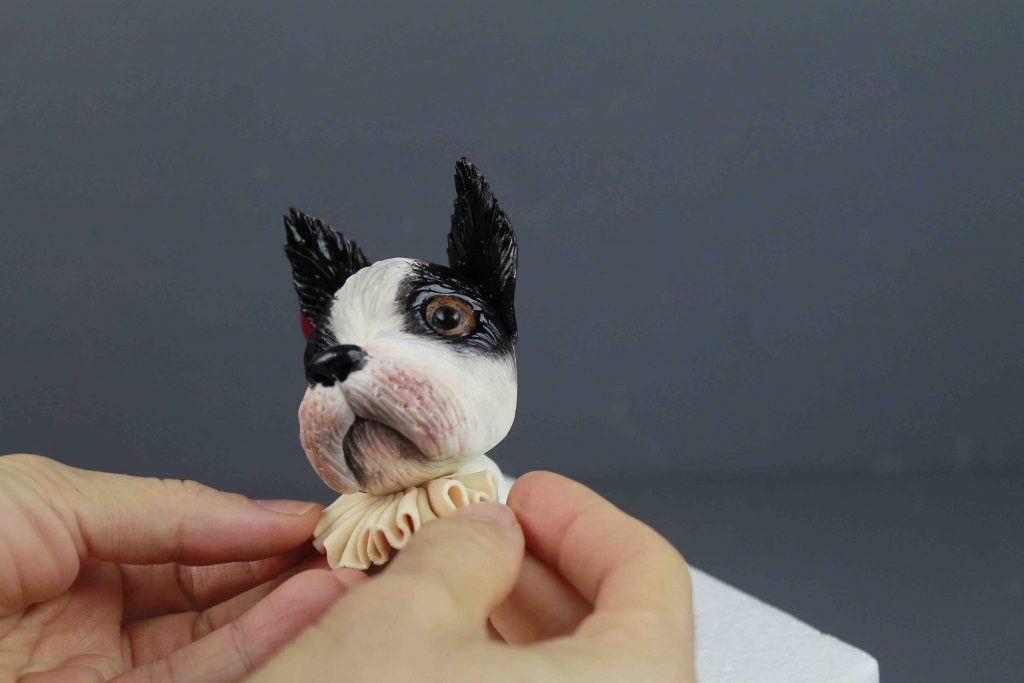 21. Add some shades to the neck with light brown powder colorant. The end! 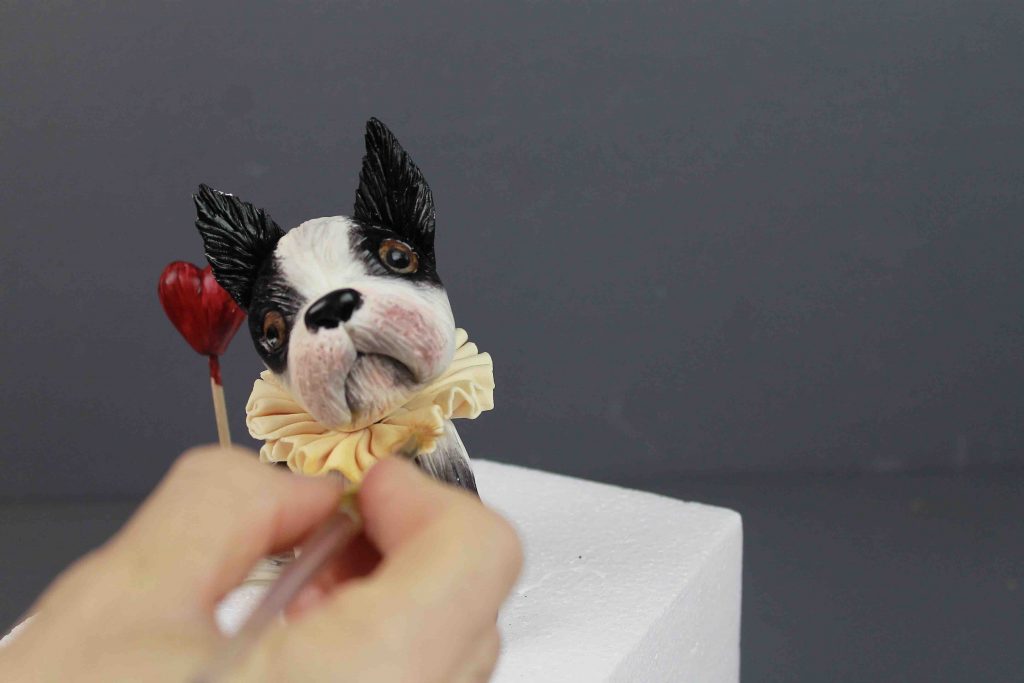 I hope this tutorial helps you to learn how to model a dog, not just a bulldog, but all kinds of breeds. You just have to change the shape of the head! 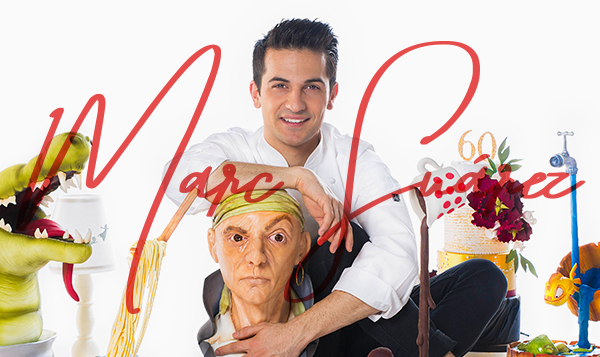 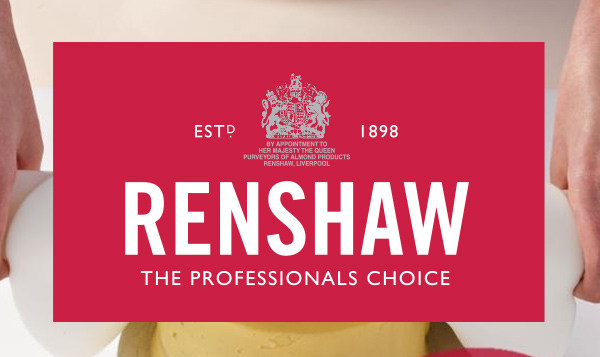 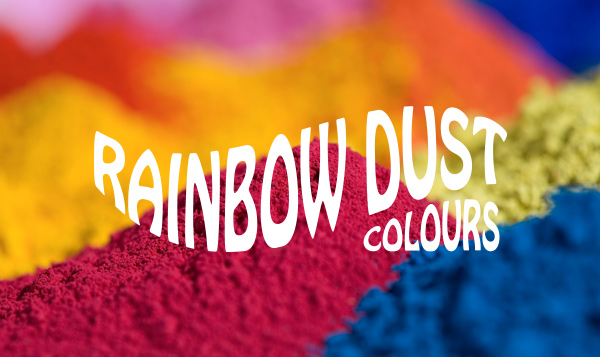