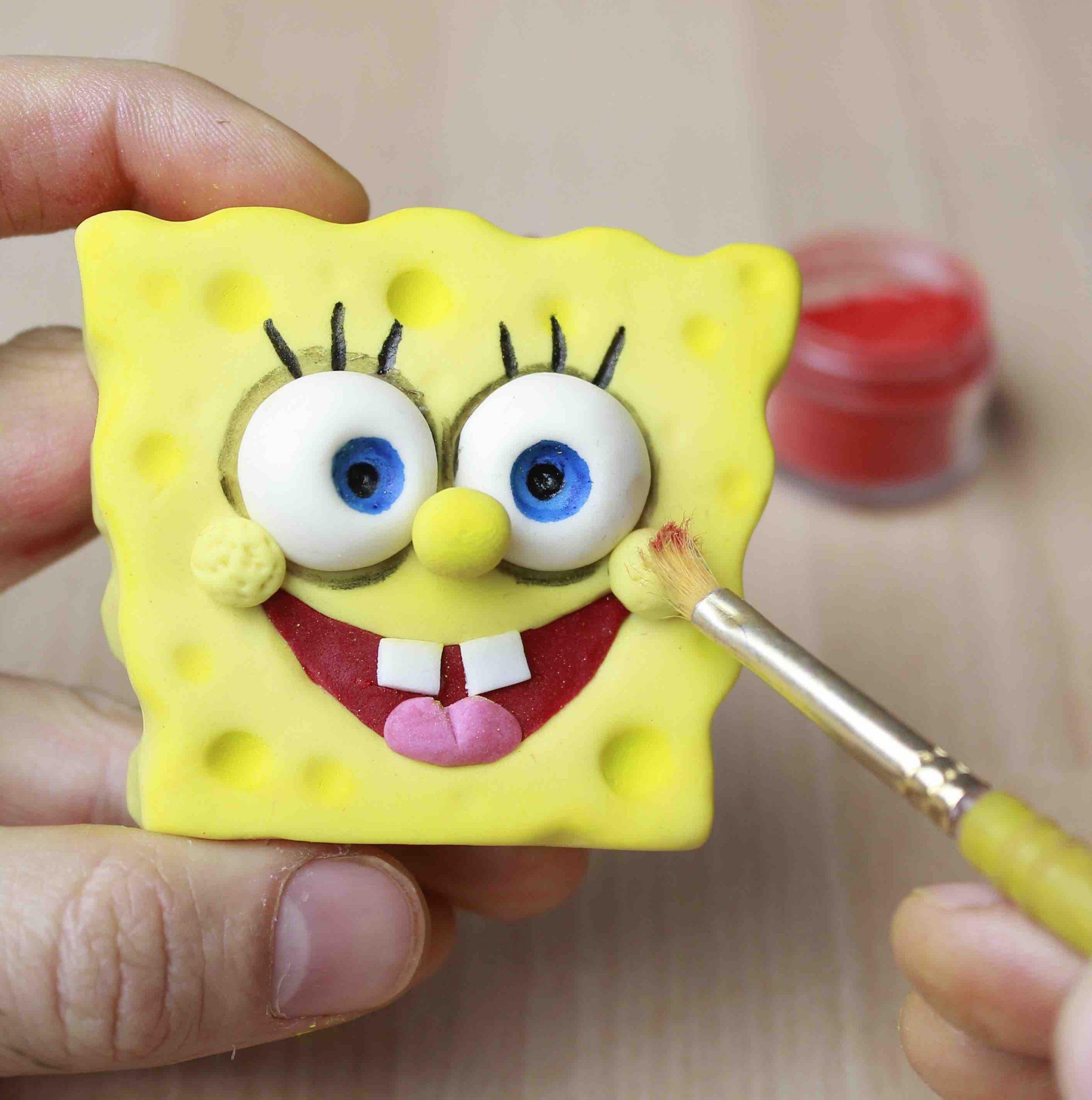 Who hasn’t sung the catchy tune “Who lives in a pineapple under the sea! SpongeBob Squarepants!”? Just a few may say no. I’m in the “yes” group, so it’s been a long time since I wanted to make a tutorial dedicated to this cartoon character. I think he’s a nice guy and that his personality crosses all age boundaries.

So today I want to share with you this tutorial with which you’ll learn how to model a SpongeBob figurine with modelling paste. It’s a helpful, step by step tutorial. Besides, I’ll teach you how to make SpongeBob’s pineapple house in a quick, simple way. Let’s start!

Material list for modelling a SpongeBob figurine with fondant

1. Before starting, make a template as big as you want. Stretch the yellow modelling paste until it’s 2cm thick. Place the face template on the paste and mark the silhouette with a cutter blade. Then, make 4 clean cuts in order to get a perfectly cut piece.

2. With the help of a silicone brush, press the sides of the piece in order to give it a wave effect. You can straighten all the lines with your fingers to soften them. Don’t add waves on the lower part, because you’ll have to add the shirt and the pants later.

4. Draw the silhouette of the mouth with a Dresden tool. Then, remove the modelling paste from the inside of the mouth to get a hole. Keep in mind that you’ll have to fill in that hole with red paste, so don’t be afraid to really empty it.

5. Make 2 equal balls with white modelling paste, brush the eye sockets with a bit of edible glue and place the eye balls. With a small ball tool, make 2 holes to make the iris. With a bit of yellow paste, make 2 tiny balls and glue them to each side of the mouth. Lastly, randomly make some holes of different sizes.

6. Dilute a bit of Petrol Blue colourant with Vodka and paint the inside of the holes with a thin brush.

7. Fill the mouth hole with some Ruby modelling paste. Press properly in order to adapt the paste while maintaining the shape of the template.

8. Stretch some white Renshaw Modelling Paste and cut 2 small squares. Glue them slightly separated. Make a small teardrop with some yellow modelling paste and glue it between the eyes. That will be the nose.

9. With a black food pen (I use Food Art Pen by Rainbow Dust), draw a circle around the eyes, as well as the eyelashes and the eye pupils.

10. Mix some Ruby paste with white paste to obtain a pinky colour. Make a tiny ball and turn it into an oval. Press it with your fingers in order to flatten it and glue it to the mouth. Finally, make a mark in the centre to break the mouth in two.

12. To make the pants, stretch some brown Modelling Paste until it’s 2cm thick and repeat the same process we followed for the face: use the template and a cutter blade. Do the same with some white modelling paste for the shirt.

13. Make a sheet of brown modelling paste (it has to be 0,5cm thick) and cut 2 circles of 1cm diameter to make the pants.

14. Stick the shirt to the pants. Then, glue them to the body with some edible glue.

15. To add some details, cut 2 white paste triangles for the neck of the shirt. Stretch some Ruby modelling paste and cut the tie. Glue it to the centre. Glue the two brown circles at the distance marked on the template.

17. Make the sleeves with some white modelling paste. Prick a piece of the 26 gauge wire inside the arm. Poke it to the body and add some edible glue to make sure it sticks correctly.

18. To make the legs, use the 18 gauge wire. Repeat the process we followed with the arms. Prick the wires to the body with some edible glue.

19. In order to finish the body, make the shoes with some black fondant with CMC. Make a ball and press it on one side to obtain some kind of pear shape. Make 2 socks with some thin, white modelling paste.

20. Use a bit of hard plastic as a support for making the pineapple house topper. That way, you won’t have to wait for the fondant to get dry. Draw the silhouette and cut it.

21. Stretch some orange fondant, put the silhouette on it and cut it with an X-acto knife. Being accurate with the cutting and the sizes is very important. Brush some edible glue on the plastic and glue the fondant. With a ruler, make some diagonal marks in opposite directions to get the texture of the pineapple.

22. Stretch the green fondant and cut the silhouette of the pineapple leaves. Glue the fondant to the plastic, previously brushed with some edible glue.

23. Mark all the leaves with a silicone brush.

24. Shade all the lines of the pineapple with some Rust powder colourant and also shade the leaves with some Holly Green powder colourant, both from Rainbow Dust. Finally, draw a line on the centre of each diamond with a brown food pen.

25. Add the house details with blue fondant. Make a door, 2 windows and a chimney. Then, shade it with some Petrol Blue powder colourant from Rainbow Dust.

26. In order to poke the pineapple house to the cake, you’ll need to add a bit of hot-melt silicone on the back of the house for the skewer to hold on it. Let cool down and the topper will be ready.

27. As those decorations are toppers for fondant, buttercream or ganache cakes, you’ll need to poke them on the cake once you’ve finished decorating it. To finish this tutorial, I’ve decided to cover the top of the dummy. I used a spike brush to give the floor some texture.

28. Finally, poke the pineapple house on the centre of the street, so it matches the door. Place SpongeBob in front of his house.

The whole process of modelling a figurine of a known character is always the same: start with a template and stick to the proportions. It’s really important to divide the figurine in different pieces in order to model them separately. Wire all the parts and join them to the body once they’ve dried.

I hope this tutorial helps you improve your sugar figurines and toppers to satisfy the most demanding costumers! See you on my next post. 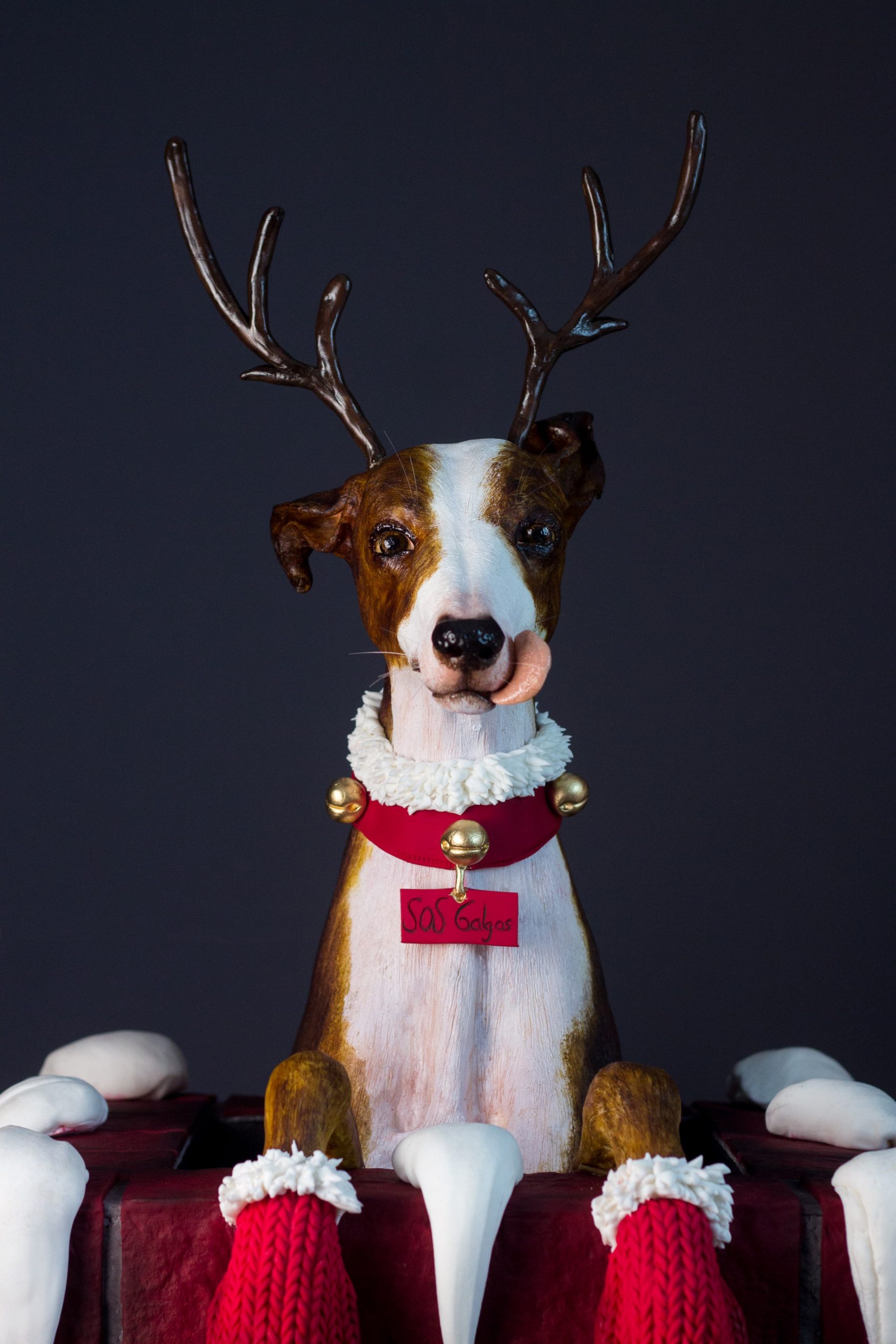 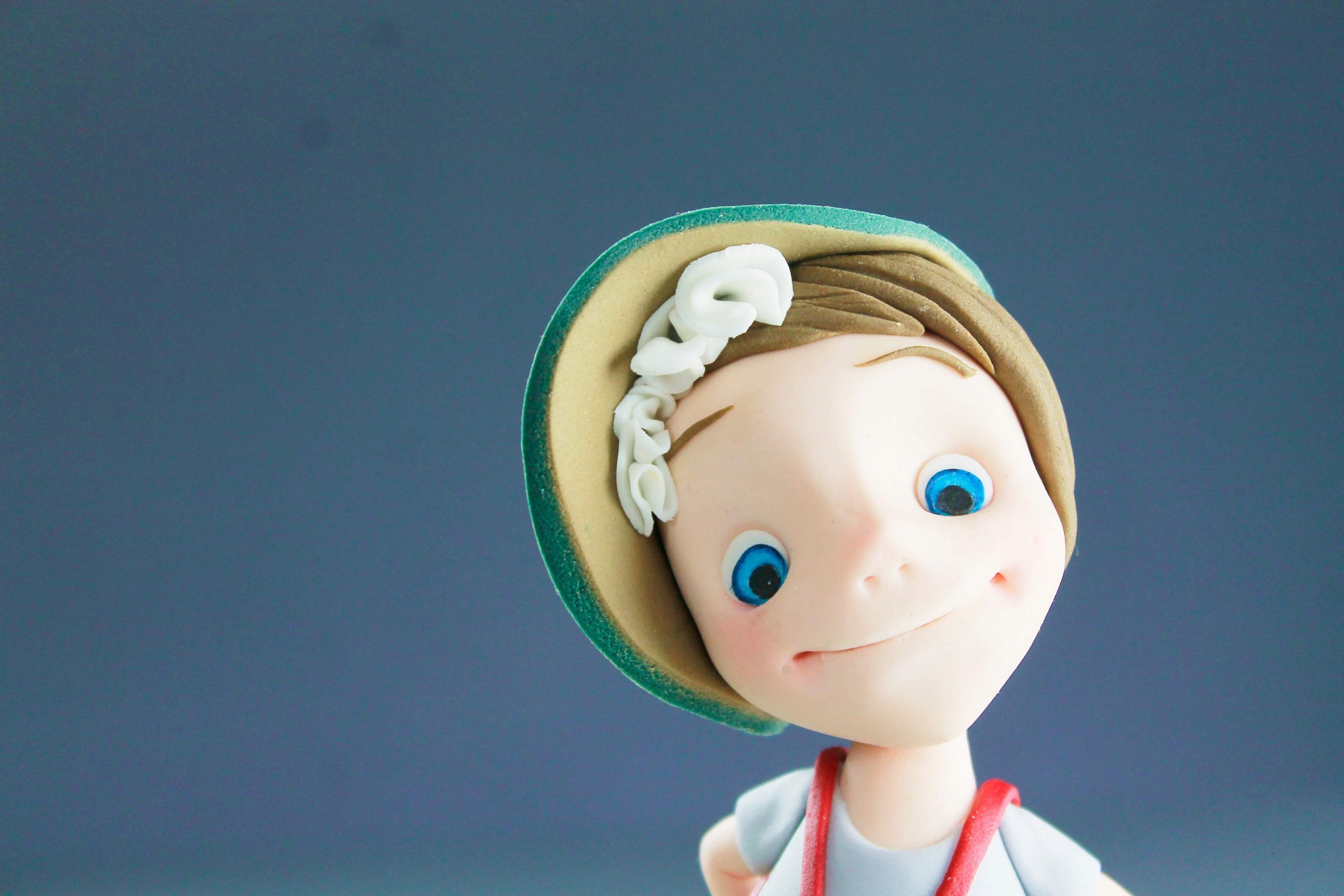 How to make a topper for your cake. Create your own cake topper: tutorial 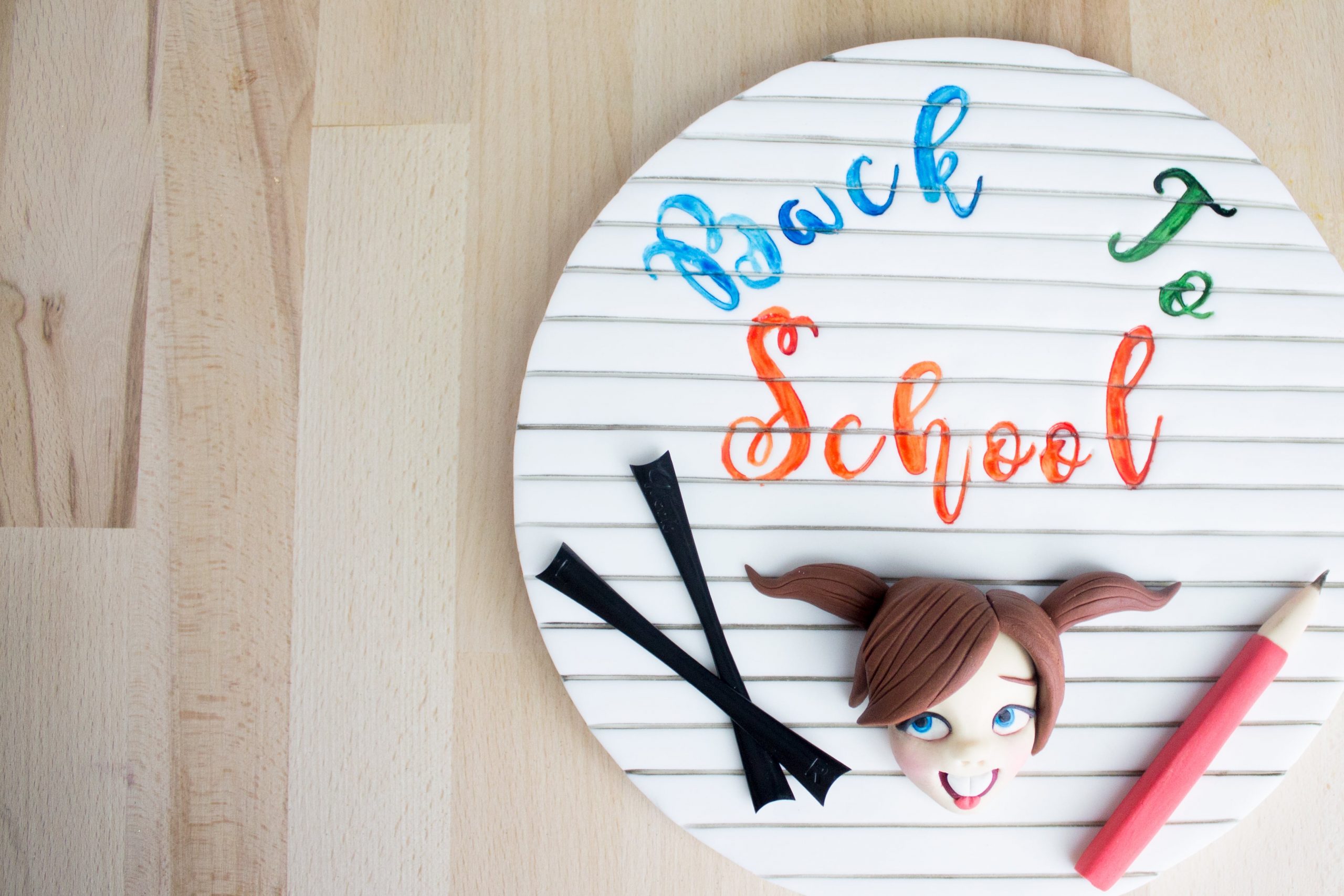 Tlook. The best tool for making eyes for your fondant figures